Pictures of the Rhubarb Custard Souffle

This is a Jamie Oliver recipe. It is very nice - the souffle is very light and airy. I have to say - rhubarb and custard go together VERY well. I think we've had them together for dessert for almost a week now - and I'm still not tired of it!

Ok, here are pictures of the souffles. 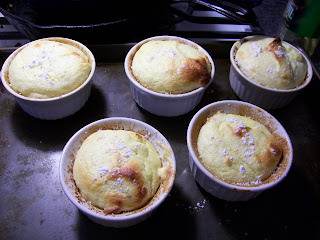 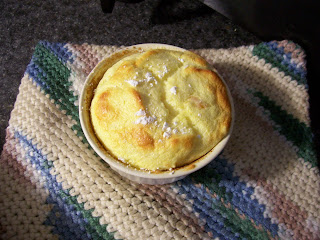 The ramikens were lined with butter and ground gingersnap cookies (I pulverized some leftover ginger cookies I made for Christmas). Rhubarb compote was placed inside along with a spoonful of custard. Mixed the remaining rhubarb and custard together with an egg yolk and a bit of flour. Whipped the egg whites (recipe calls for 4 - I did 5 since I had 4 from when I made the custard and 1 from the recipe) and sugar and whipped til very stiff. Mixed some whites with the rhubarb/custard mixture and then folded that in with the remaining white. Dolloped the mixture into each ramiken. Baked on a pre-heated cookie sheet in the oven at 350 degrees for about 20 minutes.

So, dinner tonight will be a couple pheasants. One was smoked. I'll attempt another Jamie Oliver recipe. We seem to be all about Jamie Oliver these days. If you haven't watched his Food Revolution tv shows - I would recommend it.

Hubby has been out moving the sod rolls from the new garden area. It appears he's decided on a sod fence for the garden. After all the sod is moved, we will till up the soil with our new rear-tine tiller. Now, I know some people are anti-tiller. But, we have some insane amount of square feet of very clay soil to work up - and it ain't happenin' with a shovel and fork.

Well, dinner won't prep itself. Better be off.
Posted by Jessica at 2:09 PM