With beans and apricots and will soon add zuccini (or courgettes - that word sounds so sophisticated) to the list. We survived some pretty wicked storms - except for our Bismarck corn which was blown down.

Quick post, I know. More to come with photos.
Posted by Jessica at 3:03 PM No comments: 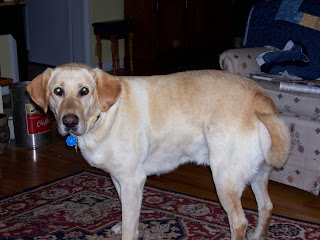 We had to put Yellow Dog down today. He seemed to be doing fine last week. But at the beginning of the week, we noticed that he wasn't eating or drinking. He seemed very uncomfortable and doing a lot more whining than usual.

We brought him to the vet earlier this week. The only thing they could find was that his bladder was huge. The vet said he had never seen a farm dog with a bladder that big. It was full and Yellow Dog seemed unable to relieve himself. They catheterized him and helped him out. But nothing seemed amiss. They sent him home with instructions to watch how he did.

The dog dish sat full. The water bowl wasn't touched. Yellow Dog would wander under a pine tree and lay there - no energy, no movement. He seemed so tired. He didn't relieve himself. He just kept looking tired and uncomfortable.

Blood work was run. Xrays were taken. Nothing.

But he wasn't improving. He couldn't seem to expel his waste.

In the end, the vet thought there was some nerve issue. There wasn't anything to do.

It is a tough thing to decide to put your dog down. It was especially hard with Yellow Dog. When we moved to our little house in the field, we had no animals. Then suddenly, on the 4th of July 5 years ago, a yellow dog showed up in our yard. No tag, no collar. But he was very friendly and loved being pet and played with. Since we didn't know his name, we called him Yellow Dog.

Concerned that he would run off before we could track down the owner, we attempted to tie him up to one of the trees. Well, Yellow Dog was a clever chap and figured out how to wiggle his pinhead out of the collar and leash. But he seemed in no hurry to move on. So, we got some food and put out some water.

Then the person we bought our old house from came by and said "Hey Cooper!". What? You know this dog?? Well yes, he said, he belongs to a guy down that way. I'll bring him back, if you want. Well, we felt a twinge of sadness, but felt he should go back to his owner. So, he was put into the back of the pickup truck and was driven off.

An hour later, Cooper aka Yellow Dog came bounding through the field into our yard. And that was it. He chose us.

We didn't have him for very long. But he was a great dog. He was very smart. During the winter, he would plant himself in front of the kitchen window. If he saw one of use looking out, he would look forlorn and start to shake. Once we moved out of his line of sight (but still could see him), the shivering would stop. He tore apart his fair share of garbage and stole food off the kitchen counter. He loved having his butt scratched - often looking back at us with a look of pure ecstasy as his hind hips were rubbed. He was very vocal, whining as we got out of the car when we got home from work. He perfected the downward facing dog pose - or as we called it - The Bow. He was a great pet and we loved him.

You are very much missed tonight Yellow Dog.
Posted by Jessica at 6:40 PM 4 comments: