It Was A Full Day

Yesterday was quite the day! So much going on - the fact that I am awake right now should fill you all with amazement. :)

Anyway, we did a lot of cooking and baking yesterday. It started off with making corn bread for a cornbread stuffing. We are getting together with some friends tonight for a themed dinner (New Orleans). So, I made Emeril Lagasse's Cornbread Stuffing. But first, I made the cornbread. 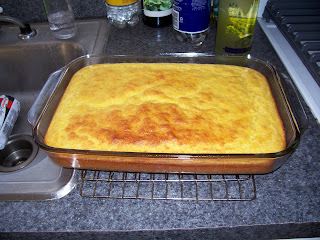 Next, I was planning on making lasagna for dinner last night. But first, we needed pasta. So, I made the Poor Man's Pasta recipe from Lidia's Family Table (I love Lidia!). She recommended this pasta for lasagna recipes. 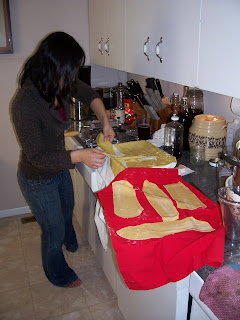 Barefoot, cooking in the kitchen. :)
As I posted previously, I made ricotta cheese a few days ago and mozzarella after that. Here is the mozzarella. 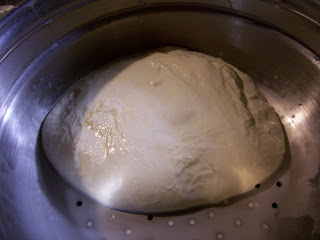 The mozzarella just after separation - draining. 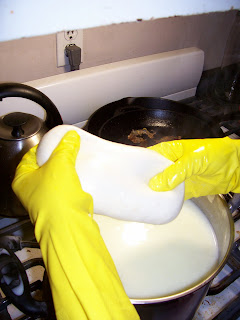 Stretching the mozzarella. It gets hot - thus the rubber gloves. 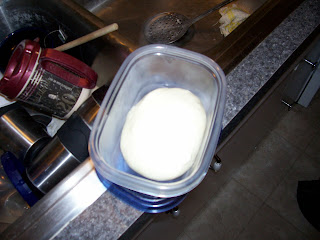 I had a whole bunch of whey left over, so I used some to make an Italian bread recipe included in the cheese recipe pamphlet. It made two huge loaves for bread with a very nice crumb. I can totally see making some really tasty garlic bread with this stuff. 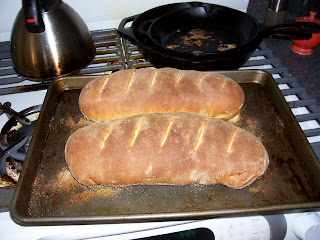 The Italian Whey Bread - a bit brown, but still very good.
Then I started on the lasagna. Hubby helped by heating up some tomato sauce that we had made last summer. He added several herbs - basil, thyme, etc. It was very nicely reduced already, so all we really needed to do was heat it up. 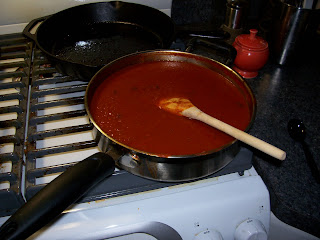 The Sauce - tangy, lightly sweet, herby, delicious.
I shredded the mozzarella while Hubby browned some pork sausage (the only thing we didn't make) and added fennel seeds and other herbs to give it that Italian sausage flavor. 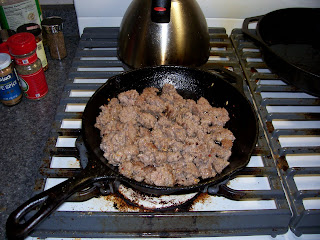 The pork sausage browning.
Then we assembled the lasagna - layering pasta sauce, pasta, ricotta, mozzarella, pork sausage, and parmesan cheese (ok, the other thing we didn't make). We topped it of with pasta, mozzarella and parmesan, covered with foil, and baked for 40 minutes. Then we uncovered it and baked an additional 20 minutes so that the top become brown, crusty, and oh so tasty! 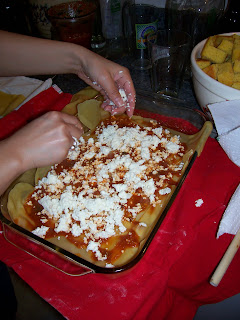 The lasagna was fantastic - great flavors. The pasta itself got a bit soft - not really surprising since we were using fresh pasta - but still quite nice. Gotta love it! 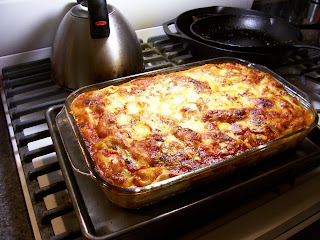 YUM!
Finally, we needed to make the cornbread stuffing. This is an enormous recipe. I didn't have a baking dish large enough. But, the andoullie sausage smells so great when it is cooking. Lots of onion, green pepper, and celery - and the requisite "bam" of Emeril's Essence. We haven't actually tasted it yet (too full from the lasagna and didn't want to cut into the dish before our gathering today). But, it looks and smells fantastic. 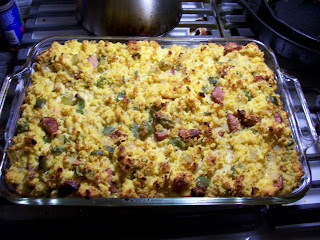 Can't wait to try the cornbread stuffing.
It was a long and productive day around here. I will admit to collapsing on the couch when it was all done. But, I would have to say it was worth the trouble. I mean, I'm sure our great - great grandparents would have looked at the day and scoffed "I wish I had a day that easy!"
Posted by Jessica at 5:20 AM