Yesterday, Hubby and I went to Corner Table for a butchery class. This fabulous restaurant in Minneapolis focuses on local, sustainable food and holds several classes throughout the year. Hubby follows the executive chef, Scott Pampuch, on Twitter and saw that some spots had opened up at the last minute. Woot!

We showed up to the restaurant at 12:30pm and were greeted by Scott. He got us some coffee and tea. Did you know that his tea distributor has directions on how to brew each type of tea? Yeah, I didn't either until yesterday. How much tea leaves, the water temperature, how long to steep - wow! But, I must say, it was a very nice tea.

Others started to show up - a couple we had met at one of Scott's Tour de Farm dinners last summer came in. The class is limited to 6 people, so everyone gets a chance to jump in and get involved.

The groups split into two and we were each given half a pig. Our half had the whole tongue. Most of the offal was taken out - with only the kidney left. We each took turns cutting and sawing various sections as directed by Scott. Remember folks: knife for flesh, saw for bone.

I will admit that I am, well, challenged, when it comes to handling knives. Hubby cringes whenever I wield a knife in the kitchen and either takes the knife away and does the cutting himself or retreats to the living room with a trailing comment of where the bandages are located. Well, Scott noted my incorrect hold on the knife and provided me with corrective feedback. 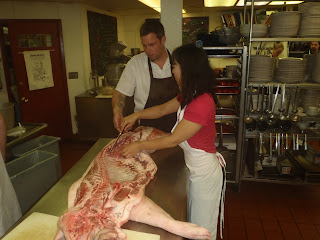 Needless to say, Hubby was exasperated since he had told me the exact same thing on several occasions. I am still working on remembering no index finger on the top of the blade. I will get it eventually.

I had to opportunity to cut out the tenderloin, we cut off the hind-leg for making prosciutto (Scott will make them with Mike Phillips, executive chef at The Craftsman). We sawed off the feet (or trotters - I love calling them trotters!). We mostly stuck to the primal cuts. We did prep the meat for making as large "sausage" - a Mortadella that was encased in a cow intestine. Plenty of chuckles as the sausage was stuffed, but a good time.

We did get a light snack - some head cheese, a nice soft aged cheese (creamy like brie but had a much more funky, strong crust - which I like), and DIY soft tacos with confited turkey, pickled carrots, tomatoes, basil. We brought some Nocino along as well. Scott also brought out a very tasty chocolate ganache - the small shavings had a deep, rich chocolate flavor enhanced by a nice saltiness. I felt it went great with the Nocino.

It was a very fun afternoon. If you get the opportunity to do something similar, I would encourage you to do so.
Posted by Jessica at 8:31 AM