We have heard rumors of massive storms tonight. We'd put off harvesting our sour cherries for days, but the rumors decided it for us. Harvest time!

This is the first year we had a good harvest of cherries. FINALLY!They look great! 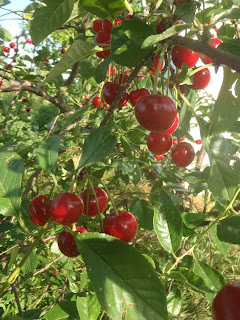 The Cherries
Of course, we need to actually do something with these cherries. The obvious answer is of course - Cherry Pie!

First though, the cherries needed to pitted. We had bought a cherry pitter sometime years ago. Good for us! It did make the job easier and quicker, though still pretty messy. 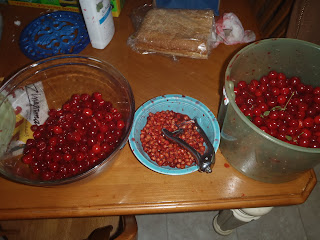 For once, the pie crust was not too bad. If you have ready previous posts, you know that pie crusts are not my forte. However, it is really hot and humid today. We don't have air condition. Thus, the dough turned out a bit more moist than I usually get it. It gummed up a bit on rolling, and still split and didn't stay nice and round. But it was a lot easier to work with and fixing it was a lot easier. Note to self - more moist crust is good.

The pie turned out great! I literally took a spoon to the cookie sheet I had underneath it and started spooning up the sweet and sour cherry-flavored goop. Ooooooooooo! Nice! 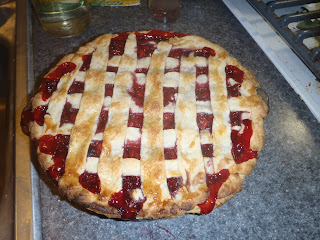 The pie
The pie is still cooling as I type. But, I know it will be good. Hubby and I will enjoy it with some Cedar Summit vanilla ice cream. Mmmmmmm.....